I've been using gors as mutants for my Lost and the Damned army list and Chaos Cultists with the mark of khorne.  I need a few more models for the unit so decided to make them a command group.

The champion has been heavily modified by a dark magos to lead the mutant herd into battle.  The musician and banner bearer are wearing scavenged space marine armor on their left arms and shoulder pad.  This was mostly done because I didn't have any more left gor arms. :)  but looks okay in the end.


I finished some more bloodletters.  I have a few more to finish up but here they are so far.

I picked up 2 more Blood Slaughterer for my khorne daemonkin.  I actually use them as mauler fiends because I can't stand the real models

They will be joining my existing Blood Slaughterer 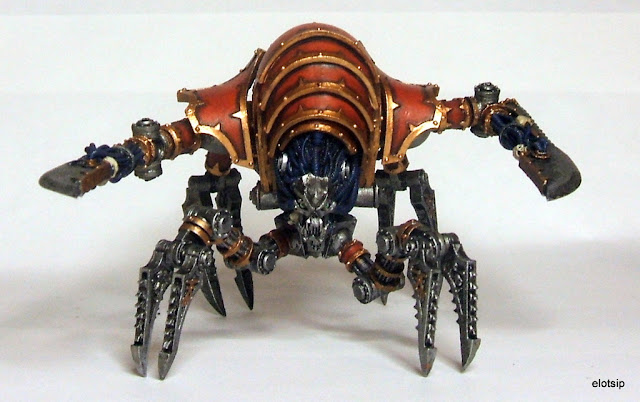 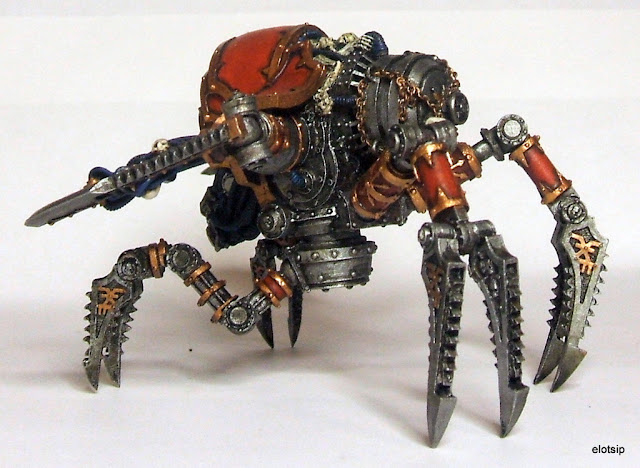 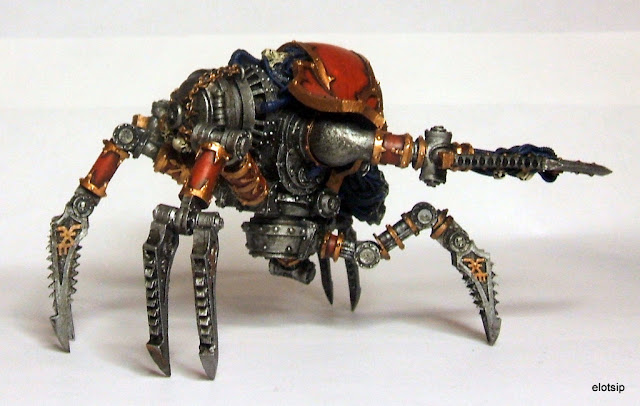 With my Decimator, Brass Scorpion, and Contemptor my khorne daemon engines are coming along nicely.
2 comments:

Better pics of some Khorne Cultists

I built and painted these a while back but realized I had never taken any decent photos of them to post.  So I thought I would do that since I think they look pretty cool and are build from a few different venders products.


The heads are from Puppetswar, the torsos are from Blight Wheel and the legs and arms are from Mad Robot.

WIP of some chaos spawn

I love chaos spawn.  The models allow lots of creativity and painting them is great as well.  So I figured I would dig some various spawn out and start swapping pieces around on ones that were duplicates or that I just didn't care for.


This is the old metal spawn.  I had two of them so I decided to tear one down and add bits from the chaos spawn sprue.

The one on the left is a Forge World Fantasy chaos spawn that came with a chaos sorcerer.  The model is great but its original arms and quite thin and its fingers snapped off almost instantly.  So rather than have him run around with no fingers I decided to remove his arms and swap some other bits on.

The one on the right is a Kromlech spawn.  I had two of them so I started adding plastic chaos spawn bits to the body.

The all still need a little green stuff work around their joints which I will get to shortly, hopefully.
No comments:

Started on some plague daemons

I had picked up the new GW color Blood for the Blood God.  It's very similar to the clear red Tamiya color often used for gore.

Typhus the Herald of Nurgle

Typhus is easily one of the coolest characters in the CSM army.   He's also nasty on the table top and looks great. I didn't spend a lot of time on him but enough to get him looking decent enough to use.  My hobby time is pretty limited these days so I've taken to spending less time on individual models so that I can still manage to get armies painted up.

I need to get a better pic of his scythe.  I used the typhus wash and some rust pigments and I think it turned out fairly cool looking.
1 comment:

Plauge Toads Counts as Spawn with Mark of Nurgle

I loved these toads as soon as I saw them.  So cute and cuddly.  The make excellent spawn of chaos with the mark of nurgle. They are a joy to paint and have so much character.

The CSM Lord on a Jugger is really a tough character in the khorne daemonkin codex.  Riding with blood crushers or spawn gives him plenty of protection and they are really fast.  I wanted to make a model for the character.  I bought a box of WFB skull crushers to use.  I would call this a conversion because I really didn't do anything to it.  I just swap out a few items to make him look slightly less fantasy and slight more sci-fi.  Its nothing fancy but it was quite and easy and will serve the purpose I set out for.  Once he's painted up he should fit in nicely with the rest of the murderous band of homicides.

I also took this pic with my phone so its a bit crappy.  I'll get some better ones once the painted has been started.

One of My Favorite Traitor Guard Units

This is one of my favorite units.  The bits go together so well.  The arms and legs are from Victoria Lamb and the torsos are, of course, FW.  They are not complex by the Vic bits look so good with the FW bits.  The arms and legs are from the Penal Legion squad so they have shackles around their hands and feet, chains dangling from them, some are missing their shoes, etc.  I'm not sure why I painted them completely different from every other unit.  I guess just to be different.

Lost and the Damned Mutants

I was scratching my head for a bit trying to figure out how to make some decent looking mutants for my Lost and the Damned list.  I searched for bits to buy but there really weren't a whole lot out there.  So I just took lots of stuff I already had and cobbled together some mutants.  I reasoned that they didn't need hands since they would surely die on the battle field.  So I took to chopping their hands off and replacing them with spikes, blades, clubs, flails, etc.  I used lots of bits from lots of companies and various kits to threw these guys together.  They don't all match but that's okay, you can't expect a bunch of mutant freaks to have time to co-ordinate their outfits.  These guys don't even have hands for crying out loud! :)

I made a few guys into chaos 'arco flagellents' in case I want to run a radical Inquisitor Lord.  I already have the model just not all of his posse after I liquidated some stuff.  Here they are though.

Here's the whole gang from the other figures I painted up for this merry band of degenerate freaks.  A few blokes were hiding out when I took the pic so its not quite the whole gang but pretty close.  If you look closely you will see a flamer or two.  Mutants can't get a flamer but I thought I may use these guys as conscripts or renegades as well so I might as well model and paint up a few flamers for them; just in case.

In my burst of painting mutants and zombies I threw in a few other units that needed to be painted but I just hadn't done it yet.   One of those units were my counts as Ratling Snipers for my traitor guard.  They mashed together from all sorts of bits; Empire Free Company, Ungors, Kroot, Catachan, CSM bits, SM bits and lots of other misc items.

The guy holding is gun standing up right is the boss.  Ratlings don't actually have one but I wanted to make a model as if they did.

Gors as Lost and the Damned Mutants

I wanted two units of 30 mutants plus a unit of 30 zombies.  I decided to be lazy on the second unit of mutants and just use Beastman Gors.  I had contemplated some alternate heads and arms but monies a but tight so I didn't want to spend the money on it.  I already had these figures laying around.  I need to get 10 more though.

I still need to convert the mutant boss as well.

Here's a pic of the whole herd together thus far.

I've got plague zombies in my Lost and the Damned list as well so I started on them as well.  these are a mix of Puppetswar zombies and some from a Russian place I found on ebay.  They mix really well.  I regreat painting them red because that made it hard to paint blood and guts but I was too far along to start over.  These are the first 15.  I have 15 more and I am debating getting another 10.