I added another 20 mutants to the roster bringing the unit up to 30.  Plus the boss.  So 31 total and I still have the enforcer to build as well.  I'm think I may make the enforcer some sort of servitor to administer the combat drug injections for the unit.

I'm using the Mutant rules from the Heretics and Renegades list.  They are essentially conscripts with 2 close combat weapons.  You can give them combat drugs which give them Rage.  So 4 attacks on the charge, WS2, S3 but only 3 points a piece.  They also get a 6+ save and a 6+ FNP to represent their mechanical nature.  Fully decked out with the Boss with a power axe and Melta Bomb and the enforcer with a power weapon and drug injector is about 140 points.  Not a great unit by any means but I still love the idea of them and finally came up with a conversion that, I think, represents them well on the table top.

The next batch of conversions got a little more work.  I replaced spines with necrons spines, added some different claw hands from the Rust Stalker models and various other bits cut off from all manner of weapons and back packs.  All in all I am very happy with how they turned out and it's really got me reinvigorated about conversions.

Here's a bunch of individual pics to show some of the details.  There were chosen at random but give a good idea of the over all look and feel of the unit.

Even the Boss got some nice new combat drug injectors.

New Batch of Mutants with Some New Bits

I ordered a couple of boxes of GW Ghouls to add to my small mutant unit.  I had 10 and got 20 more which I finally got time to start on yesterday.  I've found some other bits for these guys by digging through my Necron sprues.  I'm using the spines from the immortals on some of them.  I trim them down and then bend them to fit the curvature of the ghouls hunched body.  I think it looks pretty decent and will look better once I add the additional wires and what not.

I'm in need of additional Skitarri heads and Necron spines.  I'd also be interested in rust stalker arms and hands from the two different builds.  If you have any to part with let me know!  I'd gladly buy or trade for them.

Looks like I forgot to post pics of the spawn painted up.  It's been a crazy 6 months so it's not too shocking.  I think these guys turned out pretty good.  They are always fun to convert and paint.

Slightly converted FW spawn.  I replace a few of the bits that were going to easy break off or already had broken off.

One of the older GW spawn converted a bit.  You can see my poor attempt at a freehand eyeball there.  It's really bad...

A stock Kromlech spawn/mutant thing.  Notice after my previous terrible eye I decided not to muck this eyeball up. :)  I love those little arms on top, too funny.

As you have probably guessed, I like spawn but not the current GW spawn models.  The do have some nice bits though, just not a fan of the bodies primarily I guess.

So I really wasn't liking the direction of the mantic ghouls for the mutants.  They were just too plain looking and the variety of poses was very limited.  I raided my brothers bits box and 'borrowed' all him skitari bits and start hacking.  This is what I wound up with.  A more techno/mutant theme which I really like.  I'm treating them as archaic dilapidated combat servitors. 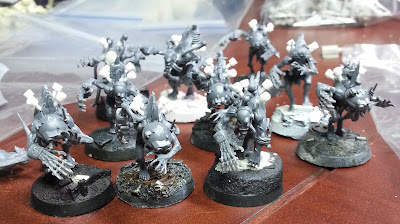 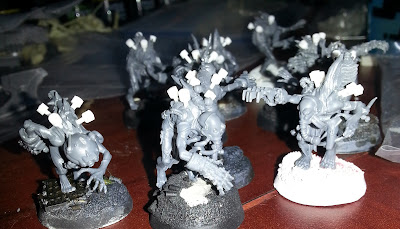 For the mutant champion I decided to convert a chaotic tech priest of sorts.  Using bits from my brother and the chaos cultist champion I hacked this fellow together.  He needs some clean up work and some green stuff work but for the most part he's done. 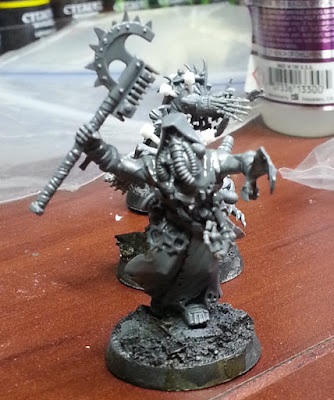 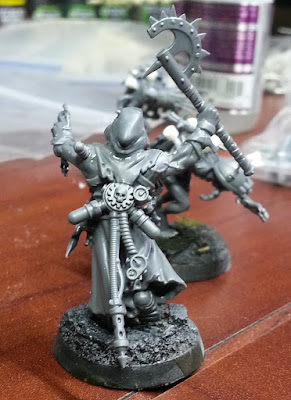 I enjoyed making these mutants so much I decided to scrap the mantic ghouls and ordered 2 more boxes of GW ghouls.  I plan to add an enforcer to the unit and I am thinking of using a scylax or something similar to represent him.
2 comments:

Back to Work - Fun with Mutants

It's been a BUSY last 6 months.  We decided to move which meant doing a lot of work on our house to get it ready to sell.  Looking at a lot of houses to find one to buy.  We ended up closing on the 18th of Dec and had to be out of our house by the 20th.  Endless to say it was a mad rush to get everything done.  Plus we had the holidays, bdays, anniversary, packing, unpacking, sort through countless boxes to find things, doing a lot of work on the new house etc etc etc.  I built a few models but nothing note worthy, just kits purchased and assembled.  Some nice kits mind you but no conversions, painting or scratch building vehicles.  I assembled a bunch of word bearers, squad of ashen circle, squad of world eater rampagers, skull cannon, some primarchs, iron hand bikers and some other things.  However, last night I started doing a little converting.  I cleaned my garage Saturday and found some of my missing hobby boxes.  I've been wanting to make some 40k mutants for the renegades and heretics but have just not had the time to do it but last night I gathers some bits and worked on a few just to get an idea oh how they would go together.  All in all I like them.  I think they have a decent scifi/40k feel to them but also look like mutant freaks.  I need 40 or 60 mutants; I can't remember which. At least I am off to a start!

These first two started out as Mantic ghouls.  I added a Victoria Lamb head and a Secret Weapon backpack.  One of them also has a Catachan laspistol.  Simple conversion but still looks pretty decent.  I didn't get a picture of their backs but they have Cadian pouches and canteens and the one on the left has an antique flintlock pistol in case his laspistol runs out of juice.

This next one, I like more, started out as a GW ghoul.  I replace the head with a head from Secrect Weapon then drilled some holes in his back to add the chem-injectors; or whatever they are.  I may put a sphere on the top of them; depends how it looks.  I also chopped off his hand and gave him a claw hand from the Mantic ghoul set.  He's got a tasy treat tied to his belt in case he get hungry in the heat of battle as well. 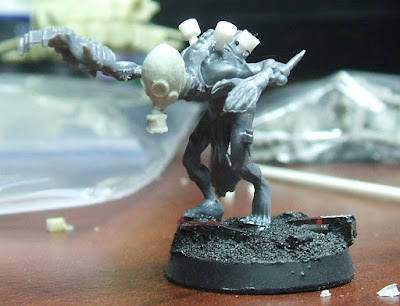 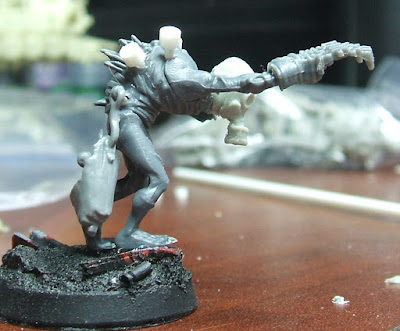 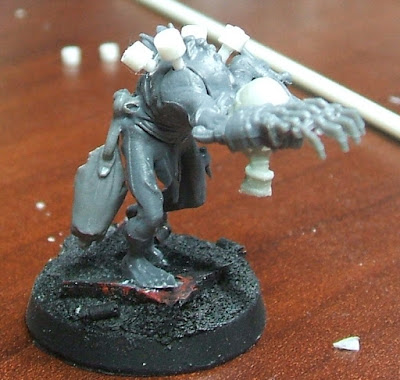 They still need a bit of clean up, such as mold lines and what not but all in all I like the way they came out.  I think a big mixed unit of these will look sufficiently different from the renegade guard and conscripts that you will recognize they are something else.

What do you think, do the bits mesh well and provide a suitable look and feel to represent mutants of Nurgle?

Now that my move is done I hope the make more frequent updates.  My hobby desk is getting put back in order so I should be good to go!
1 comment: